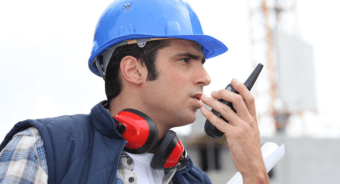 Clear radio communication ensures a safer jobsite when approached with respect and not congesting channels with pointless chatter. It can be very confusing, distracting, and difficult if not impossible to understand.

What if someone acts on misinterpreted information? Accidents happen when messages are misinterpreted over handheld radios. With the right use of language and protocols, you can communicate, knowing that your messages are being delivered and received clearly.

To become a safer and more effective worker, the following information will help.

Communication Channels
Become familiar with the different types of radios you might use at work. Are there walkie-talkie radios, hand-held radios and/or others? Are the various models available best suited to the needs for the work?

All radios have channel options, so you can speak on an alternate channel if one channel is in use by another party. This feature is critical, but it can also make communication confusing. People may continue talking without ever receiving a response. Chances are good that a non-reply is due to being on the wrong channel. Always identify your preferred channel with your co-workers so you are able to communicate.

It is wise to identify some backup channels in case unrelated users are on the same channel, or there are too many crews on a single channel, which can lead to improper or ineffective communication. A best practice, to prevent potential communication problems, is by creating worksite zones or regions and assigning each its own specific channel.

Changing a channel is easily done by rotating a switch where the channels are identified by numbers to readily see what channel you're using. All channels can then be centrally monitored to ensure no messages, affecting the entire jobsite, are missed due to isolated communication.Radio Communication Protocols
Since many worksites may have multiple workers on a channel, it is important to avoid long, non-work-related conversations which tie-up the radio channels.


Clear Communication is Critical to Safety on the Job

Radio communication on a jobsite closes the physical gaps and keeps information flowing. On any jobsite, become familiar with the channel(s) used, make sure equipment is in working order with backup power, and learn the radio language that helps with clarity, simplicity and conciseness.

When everyone follows protocols, approaches them with respect and avoids clogging up channels with needless chatter, radio communication remains clear, making for a safer jobsite.

How can WSG help?

Talk to one our safety associates for  guidance on developing a policy for Two- Way Radio communications?
Need help with protocols and language ? WSG can help. TF 1-866-347-7707